Please visit www.SFT-Canada.org for the brand new SFT Canada Website and Blog, where you can find updates on our work, our current campaigns and ways to take action!

Lobby for Tibet this May 2nd and 3rd! 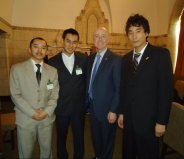 From Tibet Lobby Day in 2011 - Jigdel Kuyee, Tenzin Wangkhang and Jigme Duntak with MP David Sweet, who co-sponsored the resolution to award His Holiness the 14th Dalai Lama with an Honorary Canadian Citizenship.

Lobby for Tibet this May 2nd and 3rd!

Next Month, during the 2nd and 3rd of May, Tibetans and Tibet supporters will be on Parliament Hill lobbying our representatives to take action for Tibet! We will be following a very important ‘World Parliamentarians Convention on Tibet’ in Ottawa, and therefore this is a key meeting to urge concrete action from our Parliamentarians for Tibet. If you would like to join in on the lobby, please email canada@studentsforafreetibet.org or call 647 637 1810.

The lobbying workshop to prepare for this event will take place in Toronto on April 30, Monday at 4:00 pm and headed by Harvey Cooper, a professional lobbyist, and Tenzin CK, from Rob Anders’ office. All participants are suggested to attend this important rehearsal prior to the meetings.

Lhamo Tso speaks – The trials of a political prisoner’s wife 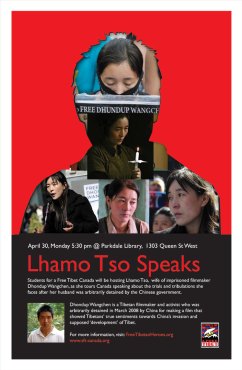 This April the 30th at 5:30 pm, join us at Parkdale Library as we host Lhamo Tso on her Canada-wide speaking tour campaigning for the release of her husband Dhondup Wangchen. Lhamo Tso will be speaking about her life in Tibet, the events that led to Dhondup Wangchen’s arrest and the current challenges she faces in his absence, with her four children, after her escape to India.

Dhondup Wangchen was imprisoned in Tibet in March 2008 for “inciting subversion”, as Chinese authorities put it. All he did was share, through film recording, Tibetan people’s opinions and genuine concerns about the eradication of their culture and identity in their own land by the oppressive regime that is China. At the time, ahead of the Beijing Olympics, China boasted of a content populace and unprecedented development in occupied areas like Tibet.

Please attend to show support, and find out ways in which we can help secure an early release, and most importantly an early reunion for Dhondup Wangchen with his wife and four children.

This April 28, 10 am at the Ottawa Civic Centre, there will be a public talk by His Holiness The 14th Dalai Lama, organized by the Canada Tibet Committee. We’ll see you there! 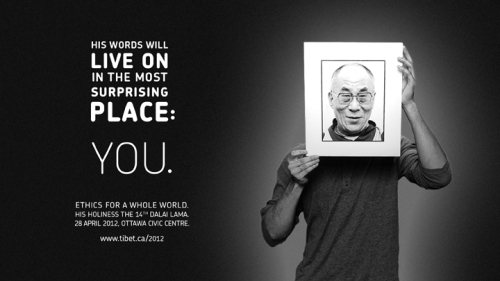 Students for a Free Tibet nominated for the 16th Annual J.S. Woodsworth Award 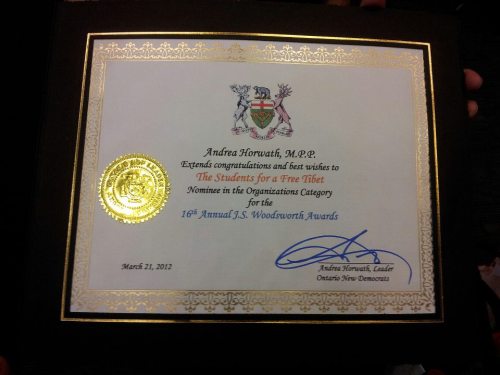 Last week, on the 21st of March, the Annual J.S. Woodsworth Awards Ceremony took place on the International Day for the Elimination of Racial Discrimination at St. Lawrence Lounge. M.P.P. Cheri DiNovo nominated Students for a Free Tibet during this event for our work, and in her words:

“This phenomenal group of young people from all nationalities… have helped make a movement for Tibetan freedom a worldwide cause and have helped organize many demonstrations at Queen’s Park and Ottawa.” 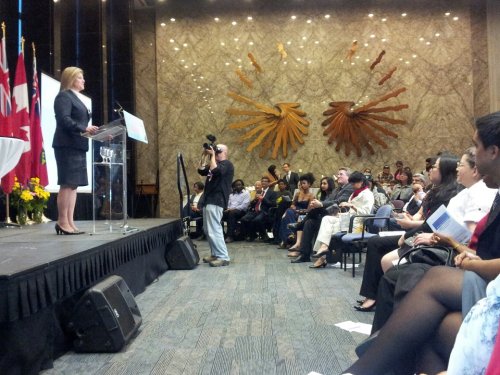 Tenzin Lobsang Wangkhang, the former National Director of SFT Canada, attended this event and accepted the nomination on behalf of SFT Canada. She, as the others before her, had put in tremendous hard work and effort in the past two years advocating, campaigning and leading the Student organization in our work for Tibet. Although SFT Canada didn’t win, we are honoured to have been nominated by M.P.P. Cheri DiNovo at this amazing Awards Ceremony that recognizes individuals and organizations that stand for truth, justice and freedom for all people regardless of their backgrounds, upbringing, culture or race. 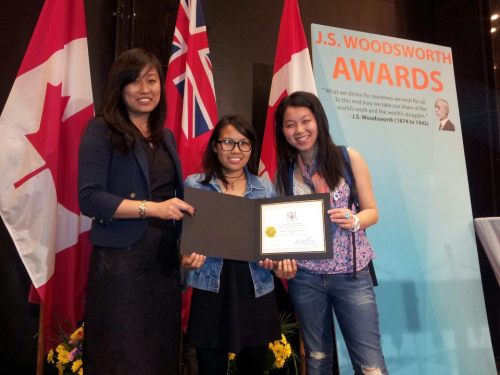